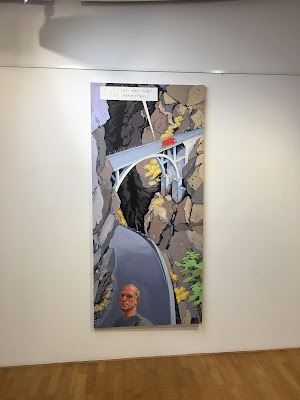 special thanks to William Firebrace

“Actually, I always paint in the subjunctive mode:”, says Holger Bunk. His paintings often show himself, self-portraits in an environment determined by architecture. They are rarely pure landscapes, but contain  traces of human activity. He looks out of the picture like an introverted and thoughtful being . He meets and seizes the viewers’  gaze and imperceptibly draws them into the image. The activities, events, actions and circumstances of the depicted characters in his works cannot be clearly determined, but instead remain ambiguous.

The painter Holger Bunk (1954, Essen) studied at the art academy in Düsseldorf with the painter Alfonso Hüppi. Already during his studies he started exhibiting; soon he exhibited abroad and won renowned art prizes. Despite his busy teaching position at the Art Academy in Stuttgart, he continued to develop as an artist. During the revival of figurative painting in the 1980s, the work of Holger Bunk occupied a special place. He had his own style that did not match the emerging groups such as the German "Neue Wilden" (new savages) or the Italian "Transavantgarde". Holger Bunk has worked in Asia and Africa and has a studio in Soest (Germany) and Amsterdam. 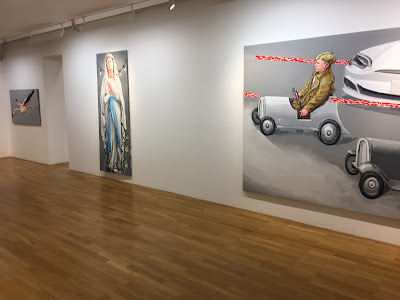 In 1980 the Basel gallerist Felix Handschin asked him to create a spatial artwork on the facade of a building. Bunk made “Hammerfassade”, paintings that partly hung in front of the windows on the building. Thrown off horizontal level, it felt as if they were falling. The building seemed to open out but remained inaccessible. The paintings fell out of the window frames or took their place. They gave the house a new facade and changed the cityscape.

Holger Bunk pointed to a common issue with works in the visual arts, for both the artist and the visitor, namely that the work cannot be separated from the environment in which it is displayed.The paintings in “Hammerfassade”were apparently floating and spatially arranged on the facade; the entire installation took on a sculptural character. Their physical presence was felt above the observer standing beneath the high wall of the building. A visual spectacle that is incomprehensible but visually challenges and appeals to the imagination.

In the retrospective exhibition „von hier aus“ in 1984 in Düsseldorf, curated by Raphael Jablonka, Kaspar König and Maja Oeri, Holger Bunk again created a three-dimensional work, the painting installation "Zweifacher Raum". The visitor became part of the installation of paintings and came close to the work , which they could walk through and that was built up like a scenic landscape. Large paintings were placed diagonally in the exhibition space, which had a passage for visitors.

In the visitors’ imagination the real space flowed seamlessly into Holger Bunk's illusory space. Those present at the exhibition could feel themselves part of the painting, by “entering” it and “leaving” it again at the same time. Although the physical distance seemed almost gone, by stepping back they could take in the whole.

In “Hammerfassade” in Basel, the paintings seemed to have a tendency to attack visually and throw themselves at the viewer. In "Zweifacher Raum" in Düsseldorf, the larger-than-life installation of paintings was more on the defensive, both in the depth of Bunk's illusory space, and in the receding, inviting space of the exhibition space.

Holger Bunk's spaces come towards you and seduce you, but they are elusive and exist only in the imagination of the viewer, which is appropriately implied in the title of the Düsseldorf work "Zweifacher Raum" - Double Space.

In more recent exhibitions, Holger Bunk used the gallery itself as a canvas, mounting drawings on the exhibition wall or even drawing directly on it. In this way the gallery became a medium and the real room and the artistically imagined space merged. This seemed only a reduced form of exhibiting, but the play within the spaces subtly continued. The exhibition space, which really only serves to present works of art, was sucked into Holger Bunk's imagination as a form and was part of his image composition from the start.

This ambiguity is characteristic of the structure of Holger Bunk's visual concept with a succession of observational and reflective moments. Intuition, imagination and signification are permanently tested by subtle but inevitable interventions in the context and structure of the image. Is it the exhibition space that makes it possible to present the work as such, or is it the work that uses the space as part of the work?

There is also, however, a conceptual element in Holger Bunk's work. The meaning of his work cannot be derived solely from the spectator's sensory perception or imagination. Visual thinking can trigger a cascade of reflections, which can be substantiated with the memory of personal observations and with one's own imagination.

This interaction takes place via the components of the work, via that which is depicted: in form via the set-up of the installation or in content via a suggestive narration, personified in the image of the persons depicted, who often seek eye contact with the spectator. Between form and content there is a puzzle on the semantic levels of text, image and technology.

The joint series of photos "Was macht das Bild in Dir, 100 Stellungen mit Klaus und Holger" by Holger Bunk and Klaus Richter from 1979 (photographed by Thomas Kesseler) is not only reminiscent of the strict formal style of Bernd and Hilda Becher and the Düsseldorf Academy, but also relates to the performance and happenings tradition that manifested itself in the previous decade with Düsseldorf academy teacher Joseph Beuys and the Fluxus movement.

Static gestures, facial expressions and postures appear formal, but do not follow a known pattern. While the gestures are clear and minimal, they remain puzzling and the intentions of the people depicted are obscure. Their apparent purposefulness is carried to the absurd, with a fine sense of humor, without the viewer ever questioning their supposed meaning.

The situation in which the characters find themselves and what they do is often difficult to interpret, because the actions are depicted fragmentarily, like snapshots. One can only guess at their purpose, their reason, and their intentions. Props, locations, and gestures can be clues, but never fully clarify the situation. Despite the pleasant tranquillity that the compositions radiate through their balance, Holger Bunk's paintings have an ephemeral character.

The supposed action of the depicted figure gives the viewer space for their imagination about what happened before and after the image. In the retrospective, the enigmatic quality prompts a search for its motives, and in the prospective for plans and goals. The scenic landscapes are all about exploring and discovering. In the architectural, urban or interior space, it is about social conventions and civilization. It is granted, implemented, reported, monitored, controlled - with technical equipment – people visit, plan, go, walk, sit, compare and consider.

Of course these are activities that are part of our civilization, our existence. They belong to the present human existence; they illuminate life and make it possible. The question that arises in the viewer's mind when observing the depicted figures is: what is happening here? Followed by: is this important? And: is it necessary or appropriate and correct in this way? This explains Holger Bunk's initially quoted statement about painting:

“Actually, I always paint in the subjunctive mode”

It's always about the possible, what might happen in the next moment, or what just happened. The problem of contingency in philosophy is touched upon here, which attempts to shed light on the problem of chance and the tension between impossibility and necessity.

The secondary question then arises as to the underlying conventions, norms, values or the prevailing ethos, which determines actions with its rules.

To understand this further, Holger Bunk adds written, drawn, printed and painted words to his compositions. His characters hold sheets of paper, envelopes, plates, the first pages of books, comic books or scraps of paper that seem to have been put together in the paintings. Entire series of works on paper use the collage principle to incorporate writing in the form of words or sentences into the composition as an image component. The juxtaposition of visual and text messages is again puzzle and a clue for those looking for a reason and meaning.

Giving meaning to the images and assigning them takes place in spoken or written language. Speaking and writing about art is part of the visual arts; verbal silence less so. Text as a constant companion, as a knowledge tool and filter, guards access to the visual. Holger Bunk takes this threshold nestles comfortably into the fabric of the image structure, as a guest who can be questioned and cannot just be shown the door.

Language also intervenes in everyday perception; it comments, criticizes and is sometimes a know-it-all and pedantic. Just as the image memory of the everyday is only present in the subconscious mind, which transmits perception and visual thinking, text can act as an impulse for visualizations for the viewer.

It should be noted that even Holger Bunk's studio in Soest has not been spared the influence of text. Housed in the former prayer hall of a church, after renovations a biblical motto was revealed, forming a warning through the painting on the wall: “But to you who will listen, I say…”. What transcends empirical reality here unmistakably reveals itself as an apparition and may symbolically clarify what Holger Bunk is all about.

In his painting, doing and thinking are very close to each other. The characters depicted exist in their own reality, using language and intellectual depth. The viewer is challenged to follow Bunk's thoughts, but he ensures that his work remains elusive. The viewer can never reach it but has enough to fill in himself when reading the image.

What now remains is that, after entering into his imagination, Holger Bunk's works become 'readable' as images of thought and thereby alter our ideas and assumptions about 'reality' as form and structure. And that is not only sensitive and reflective, but sometimes also very humorous. 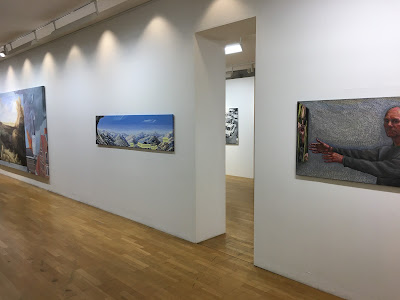 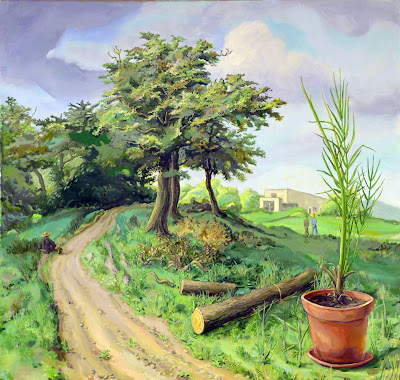 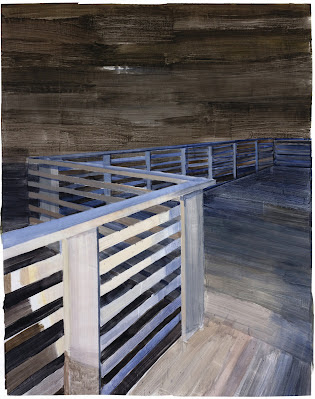 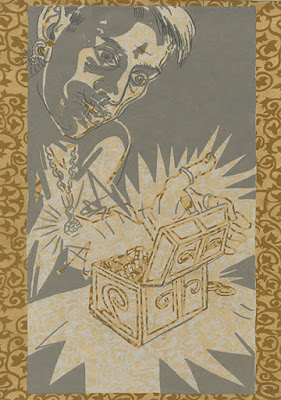