In 2015 Holger Bunk received an invitation to an exhibition in Kunstraum Neuruppin. This city to the north of Berlin is not only famous because of Theodor Fontane, but also and especially as the production site of the «Neuruppiner Bilderbogen». These coloured broadsheets were especially popular in the eighteenth and nineteenth centuries. They could teach or simply entertain, or they could be understood as decoration because «fine» art was not commonly affordable. In this way they became collectibles. Various topics were visualised in the popular broadsheets full of images. The “Neuruppin Bilderbogen” was an encyclopaedic medium that explained the world in easy but memorable ways. The prints introduced the world of the plants, fruits, animals, minerals in schematic overviews; typical landscapes were shown as travelling was not possible; regional traditions were conveyed; fairy tales or moral stories told in short scenes. In short: these prints were visually appealing and popular and were used in schoolrooms or as flyers. A broadsheet concerning the Franco-Prussian War 1870/71, for instance, was allegedly printed in an edition of almost two million prints.

This is the background for Holger Bunk's work «Irrungen Wirrungen», which takes its title from a novel by Theodor Fontane and uses a quotation from it. [Translator's note: The title means "errors and confusions" in a very literal sense; the novel by Fontane was translated as Trials and Tribulations (1917), A Suitable Match (1968), and On Tangled Paths (2010).] The book itself is referenced on the sixth sheet in the form of a yellow Reclam paperback, combined with a QR code. If scanned, it leads the user to an essay on painting by the artist himself,  originally held as a lecture at the Academy of Fine Arts in Stuttgart and now published on the blog channelno178.blogspot.de.  Bunk has devised his work as a series of sheets, each beginning with a word from Fontane's quotation.

Also in 2015 Bunk visited Kunsthalle Bielefeld in order to see the exhibition «Serendipity - Niklas Luhmann, Ulrich Rückriem, Jörg Sasse». In this exhibition Luhmann’s famous slip box was exhibited for the first time. Reading Luhmann's writings on art and culture, Bunk chanced upon a sentence which he now wants to assign to Fontane's sentence. Two opposed literary styles are thus brought together: the romantic Fontane quotation is juxtaposed with the analytical Luhmann excerpt. This results in two words on each sheet of the series, their constellation arising from the coincidence of their superimposition. At the beginning, before quoting the two sentences, and at the end of the series the artist placed full-length self-portraits.

The logic of the sentences dictates the order of the images. Fontane is noted on the top of the page in red, Luhmann’s words beneath in blue. As the sentence by the sociologist consists of more words than that by Fontane, sheets two, and three of Luhmann’s sentence have no corresponding words by the romantic novellist. In order to give a biblical reason for this artistic process: in the beginning was the word.

Henceforth, Holger Bunk lets himself be guided by the associations triggered by the words in his invention or discovery of visual elements. A striking example is the pair of terms on the thirtieth sheet, «Ehrlichkeit/Rede» (honesty/speech), which Bunk collates with the drawing of a historic photograph of the Eichmann trial in Jerusalem 1961. In sheet four with the term «Medium» Bunk shows the printing of a broadsheet in a cartoon-like manner. He thus illustrates reproduction as such. In sheet 26, «Was/man», he refers to the city by displaying the façades of Theodor Fontane's birthplace, of the high school this city's important son visited, and finally of Neuruppin's church; in this idiosyncratic veduta of Neuruppin, the artist shows its landmarks visualised on the page like successive theatrical backdrops.

Sheet 32 is equally striking with its pair of terms «Freiheit/akustisch» (freedom/acoustic); in this sheet the distinctive cartoon style of the French satirical magazine Charlie Hebdo is recognisable, thus referring to the Paris terrorist attacks in 2015.

These examples may suffice to prove that Holger Bunk's visual series «Irrungen Wirrungen» works in two dimensions: on the one hand it is spontaneously associative, but on the other it refers to a multitude of issues beyond Neuruppin and Fontane in a highly planned and conceptual manner. He has created a contemporary broadside exemplary for the flood of images present in today's media in which we daily have to find our ways. Similarly, Bunk mixes a great variety of styles and techniques in «Irrungen Wirrungen»: he works with pastels, the pencil or watercolours, and creates motifs from his personal image archive–itself in constant need of restructuring– be they visual quotations of other sources or invented figurations. 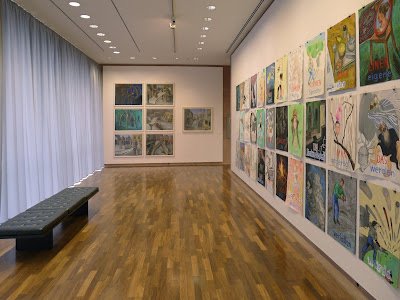